"In the simplest terms Digital Poems are born from the combination of technology and poetry, with writers using all multi-media elements as critical texts. Sounds, images, movement, video, interface/interactivity and words are combined to create new poetic forms and experiences.”

For a long time, there was a debate about the (alleged) ‘division’ between page and stage poetry. What is each form doing, who is it for, within which frameworks might we critically engage with them? The same has happened with ‘traditional’ and ‘digital’, as if this was a similar divide, when really the division is an illusion. In reality, the digital world has simply given us new opportunities, stripping away certain constraints and adding possibilities for expressing creativity and telling stories in new ways.

Digital forms of poetry, which don’t always seem to fit into traditional canons, seem to leave us without the language to analyse them. But digital poetry is also doing something rather remarkable: it is driving poetry sales up, and is creating new audiences who are finding poetry. But to call digital poetry – in particular Insta-poetry which has an enormous following and which we’ll be studying in this course– a ‘way in’ to other forms of poetry has always felt to me rather insulting, because it dismisses the form as merely a gateway, presumably to cleverer, more intellectual kinds of poetry.

And of course, digital poetry pre-dates Insta-poetry. As early as the 1960s there were writers experimenting with code and algorithms, including JM Coetzee who used his programming skills to run experiments in computer-assisted verse writing which allowed him to create unique word associations (a little like David Bowie’s famous ‘cut ups’ method which chopped up phrases to create a wonderfully random song lyrics).

In a way, digital poetry is doing something that the more avant-garde of the traditional page poetry cohort were already attempting in more analogue ways, from visual and concrete poetry (which we will touch on here), to sound poems. Poets have always played with media, cutting, chopping, changing, flexing, and challenging themselves.

Here, a poem combines the visual with the digital. Bicycle Built for 2,000 harvested sound clips from 2,000 people each mimicking a micro-section of the song ‘Daisy Bell’. The mechanism is digital, the output sound, and there is also a visual ‘imprint’ of the poem, which looks like this: 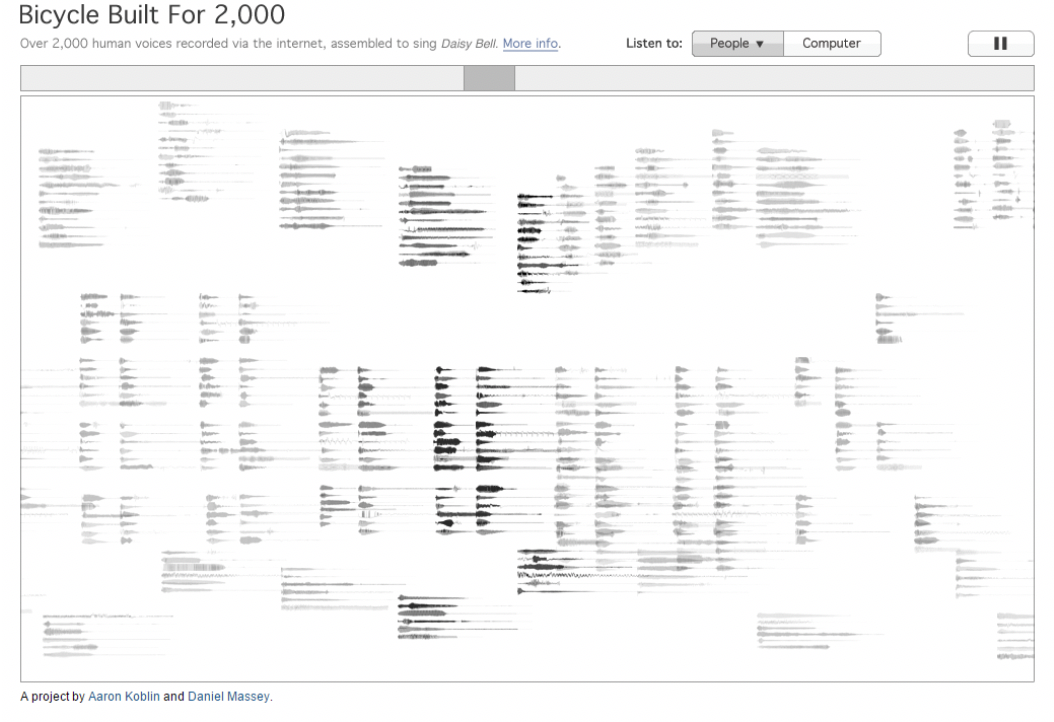